The planning of the Rosetta mission started in 1993. It originally aimed to send a lander to the comet Wirtanen in order to collect from its surface data of considerable importance to understand the origins of our solar system as well as possibly life on our planet. Initiated by the plan for the lander, the Institute of Materials Physics in Space at the German Aerospace Centre (DLR) started developing a quick reacting valve for the dosage of the gas flow in the planned cold gas maneuvering nozzles of the lander. It delivers the smallest amounts of pressurized gas and thereby controls the satellites movements.

Although in the end another control concept without quick reacting valves was realised for the comet lander, the development of the valve started at that time have considerably advantaged its technique. Meanwhile further developments of the valve have been effected for various applications, especially the magnetic ball valve with a very simple design for fluid and gaseous media.

The valve was meant to function in an actively controlled lander and was developed as such until it was opted in favour of a passive system. That decision naturally excluded a further development reaching TRL 8 and above.

Status of technology development for the potential application

Several years of R&D led to a valve  with a large dynamic range from 100 nl / min to 5l / min in one component. The valve is extremely fast (1ms), direct and stochastic switching, which allows real time applications. The service life is outstanding with proven billions of switching operations.

The patented three-pole technique for better ball guidance will be used. The valve is optimized regarding power consumption and size to better fit in even in confined spaces.

In a first experimental set-up the feasibility of this approach was demonstrated with the valve V330 and a nozzle-outlet bundle (see series of pictures 3-7, time interval 0.02sec)

The magnetic valve is commercially in use at Bayer Material science for dosing of (liquid) polyurethane precursors for several years with a proven track record. That applies equally for the regulating of (gaseous) media via a valve which is identical in principle.

The proof-of-concept of the nozzle-outlet system was given at the German Aerospace Center.

In the beverages industry mixed beverages (e.g. energy drinks) are bottled according to the recipe including the flavour concentrate and capped in the same filling station. The flavour concentrate precipitates in the piping preventing the switch to other flavours leading to “dedicated lines” with a strict limitation of bottle types which can be filled in the specific filling line. A valve capable of very fast, accurate dosing of small amounts of concentrate (i.e. milliliter) would facilitate a different production procedure of bulk filling of any type of bottle  separate dosing of any concentrates  capping. Subsequently resulting in a maximum degree of freedom in the planning process, the full utilization of the plant capacities and a quick response to the customer wish regarding the combina- tion of flavor + packaging. This opportunity applies to the beverages industry in its entirety since flavoured beverages are en vogue long-since. The project was started applicant with the company to the company Sidel, which is a contract filler in the beverage industry. During the project period KTW Systems and Sidel got a different understanding of the ownership of the intellectual property of this application. KTW Systems stopped the project with Sidel and had to look for new partners. With the companies Bronkhorst High Tech BV and Sidel KTW Systems restart the project. Sidel is the leading global provider of PET solutions for liquid packaging (www.sidel.com) and Bronkhorst is a leading company in mass flow meters for liquids and gases (www.bronkhorst.com). Out of this reason KTW Systems had to postpone the final report until end of June 2019. The goal of the project was extended due to the requirements of Sidel. In detail the dose range was extended from 0,5 ml up to 10ml in less than 0.7 sec with a pressure of 4bar.

The identified solenoid valve offers a quick response time ≤ millisecond, a precise dosing and a minimum dead volume. Moreover, it is cip-capable, can be equipped with food-compatible contacting surfaces and has an unparalleled life-span. In a flavor concentrate dosing station a minimum number of those magnetized ball valves would enable the before-mentioned change in the production strategy. The results in production would be a flexible and easy production planning and a maximized overall equipment efficiency (OEE) preventing or postponing invests and reducing the capital employed. The beverage industry is looking for solution to avoid the cost intensive premixing an mixing processes before filling. A quick response to actual buying behavior and future changes thereof without the risk of stock-building/non-supply or end of shelf-life and disposal.

The concept has been tested successfully at the KTW systems site and DLR respectively. This verified the general feasibility but showed also the necessity for fully-fletched demonstration regarding long-time accuracy. Besides the usability for instationary mass flow applications was developed in the joint project Multidrin (development of a direct injection system of gaseous and liquid fuel for large stationary engines, Federal Ministry of Education and Research, funding code 0lLYf 403A).

To our knowledge there should be no technical problem in the modifying of the existing experimental set-up towards the larger Transfer Demonstrator. The outlet-nozzle system has to be designed to guarantee splash-/drip-free dosing in a high-speed process and easy insertion into all types & sizes of beverage receptacles (e.g. bottles, cans). The problem will be overcome by materials choice and design/aperture of the tubes allow.

The development of the magnetic valve has benefitted of several years of research and development at the German Aerospace Center provided by own research budget and funded projects. The R&D at KTW Systems was financed by the company cash flow.

DLR is the inventor of the valve. The technology receiver is KTW Systems which is the applicant of this proposal with its work described in detail. The end-user will be the beverage producer with Sidel as reference customer (please see Details on the work to be undertaken or the Transfer Demonstrator)

The beverage dosing valve has benefitted from several years of KTW’s commitment in the field of the magnetic valve. KTW will support the creation of the transfer demonstrator with skilled experts, material and test facilities.

This video show the complete and accurate system, consisting of valve, output stage, sensor, flow meter and software, filling concentrate in 20ms and controlled and measured.

The tests results of the mid-term report were performed to fine-tune between dosing valve, power supply, sensor and rotary dosing table. The status can be seen in the videos:

What can be seen is, that a random sequence of cans are filled with a small amount of liquid at a speed that is typical for the beverage industry! There are a lot of “fast valves” in the market but not one which is up to this “arbitrary, high-speed” requirements. 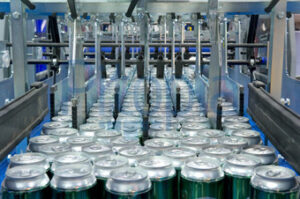