Fresh eyes and new collaborations can sometimes elicit solutions to problems that established players simply can’t see. This was the case for a new type of high precision valve that was developed for space applications at DLR, the German Aerospace Centre, and is now being applied to the beverages market by KTW Technology, with support from the ESA Space Solutions network.

KTW was founded in 2017 with the aim of finding a better way to fill bottles and cans with flavoured liquids in response to the growing market for energy drinks and flavoured beverages. Having identified the opportunity presented by DLR’s novel valve design, KTW developed it further and created the specification for a matching output stage that, together with the valves, would form a complete high speed dosing system.

Development of this system was then supported through an ESA Technology Transfer Demonstrator project. KTW is now selling both individual valves and developing standalone filling systems.

“The beverages industry has been looking for an alternative way to fill flavoured drinks for over 10 years,” explains Wolfgang Teichmann, managing director of KTW. “Existing filling systems suffer from the problem that after filling with one flavour, the smell lingers in the pipes and equipment afterwards, despite intensive cleaning.

“Our aim was to create a solution where fewer, faster dosing valves could be used to deliver the flavours as a concentrate at the beginning or end of the filling process, making systems more flexible and energy-efficient, and significantly reducing both the time lost to cleaning and the waste of flavours.”

KTW found its enabler in the DLR quick-reacting, precision valve. The valve is unusual in that it has just one moving part – a ball that sits in a ‘valve seat’, keeping the valve closed until it is moved by a magnetic field to open it.

From comets to cans

The valve was originally designed several years ago by Dietmar Neuhaus, a physicist at DLR. He identified its potential for manoeuvring satellites using pressurised cold gas and proposed it for the Rosetta comet lander, although eventually an alternative system was used that didn’t need quick- reacting valves.

“This valve design has a number of benefits over traditional designs, including those with springs,” explains Neuhaus. “With only one moving part, it has a very long lifecycle. The direct, stochastic switching function means it is extremely quick to react to the incoming signal and very precise in the dose it delivers.”

The valve offers response times of 1 millisecond or less and can provide incredibly accurate doses from 0.5ml upwards.

“In a typical beverage dosing system, you would normally have a carousel with lots of valves – often over 100 – filling the containers with the final liquid, whereas with our solution you only need one or two valves providing microdoses of the concentrate at the beginning or end of the line,” explains Teichmann. “Speed and precision are vital. We can fill 1,000 cans per minute with 2ml flavor with just one or two valves.”

“Longevity is also important in the filling industry. Diaphragm valves used in the beverage industry typically have a lifetime of 700,000 switches, whereas our valves, with just one moving part, have been shown to last for over 10 billion doses with low maintenance. When any maintenance is needed, it’s quick, cheap and simple, taking just minutes to do.”

Other elements of KTW’s new filling station also had to be redesigned to match the speed of the valves. KTW is working with a company called Bronkhorst to provide a suitably fast flow meter.

Teichmann credits the involvement of EurA, one of ESA’s technology brokers in Germany, as key in getting KTW’s products to their current market-ready status. “They told us about the ESA Demonstrator project, which came with valuable funding of €39,000,” says Teichmann. “We were only a few people, so we couldn’t have got this far this quickly without EurA’s support before and during the Demonstration project.”

Dietmar Neuhaus at DLR, which holds the patents for the valves, has also been supporting KTW. “Technology transfer should include taking time to make the transfer work. KTW was an ideal partner because they weren’t focussing on optimising the cost and technology of existing designs, but were instead looking for a solution to a specific problem.”

KTW is promoting the valves for additional uses, including compressed air applications. DLR’s Dietmar Neuhaus has other opportunities in mind, including applying chemicals in precision agriculture and for the production of spotted microarrays in biotechnology. He would also still like to see them used for space applications, highlighting their ability to cope with very cold liquids and gases.

“Entering the beverages industry is a risky venture,” notes Günter Hohmann from EurA. “Projects are often time-consuming and funding can be difficult for SMEs. Our role includes providing support to help them access not just technology but also funding, which in this case enabled them to concentrate on developing their solution. It’s really exciting to now see this project come to fruition.”

In a typical beverage dosing station, carousels have lots of valves filling containers with the final liquid. The KTW system need just one or two valves providing microdoses of the concentrate at the end of the line. This video gives an example of how fast the KTW precision valves can operate.

Speed and precision are vital in the beverage industry. KTS’s system can fill 1,000 cans per minute with 2ml flavor with just one or two valves.

The valve concept used by KTW was originally designed several years ago by DLR for space applications, such as manoeuvring satellites using pressurised cold gas

The new valve design has a number of benefits over traditional designs, including those with springs. Among its advantages are that because it has only one moving part, it has a very long lifecycle.

The valve’s direct, stochastic switching function means it is extremely quick to react to any incoming signal and very precise in the dose it delivers.

The KTW version of the valve offers response times of 1 millisecond or less and can provide incredibly accurate doses from 0.5ml upwards.

The DLR valve design was originally proposed it for the Rosetta comet lander, although eventually an alternative system was used that didn’t need quick- reacting valves. Now it has found a range of applications on Earth, including filling cans and bottles in the beverage industry, thanks to KTW. 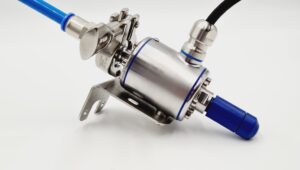 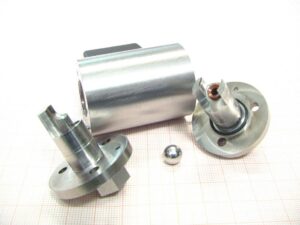